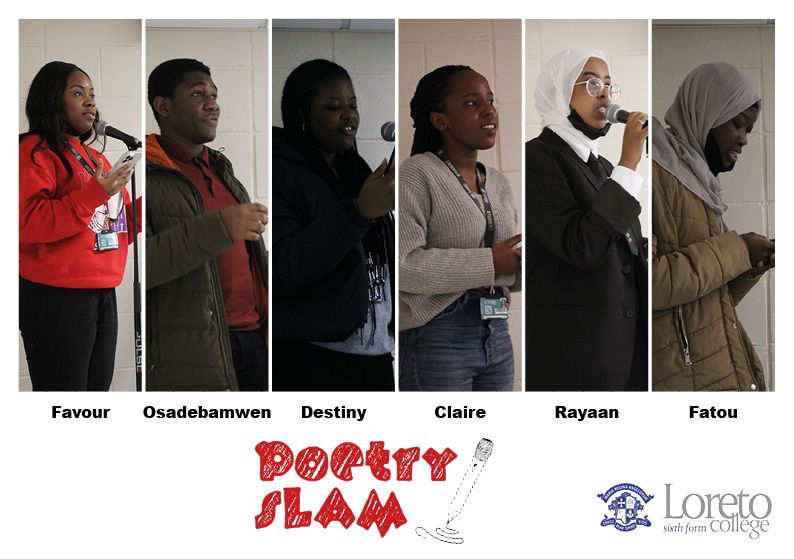 Motivated by a collective wish to promote Black History beyond the annual 31 days allocation, Loreto U6 students Destiny, Claire, Favour, Tia and Ruth came up with the idea of hosting Loreto’s first Poetry Slam. There was an open call for students who had something to say and were prepared to say it in front of an audience through poetry (self-penned or not) or spoken word. A month later, six brave students took their turn on the small corner stage in Ward Study Centre, and stood at the mic in front of a group of encouraging fellow students and spoke.

First up was Favour, who eloquently read The Pain of a Black Woman by Naomi Johnson. Favour came across the poem during a Google search for black poetry, and as a woman of faith, she found the poem really resonated with her. Next up was Osadebamwen (friends call him Osas) who enthusiastically explained that the impulse to write Empire came from the book ‘The New Age of Empire’ by Kehinde Andrews, which he read after attending a tutorial on Black History. Osas apologised that the poem wasn’t properly fleshed out, having just written it that morning, in about ten minutes. The enthusiastic response to his impromptu work and performance showed that no one else in the room agreed with his assessment.

Destiny chose prose as a way to share her thoughts and feelings. There was an urgency to A Collective of Messages, reminding us all that we have a responsibility to educate ourselves, if we’re ever going to rid society of racism. Lucille Clifton’s Won’t You Celebrate with Me, packs a punch as a poem about racism and inherent gender inequality, Claire gave the poem the fire it deserved, with a call to all present to check out the work Penguin Books UK are doing to try and address the lack of diversity in the literature taught in education, you can find more about it here.

Inspired by her experiences of being a black woman, Rayaan delivered her poem, A World We Have Made from memory, giving her performance an added physicality as her hands, free from holding a mobile phone or a bit of paper, were able to sway along to the beat of her spoken words. Fatou was the last student to be accompanied by a warm round of applause as she made her way to the stage. She delivered her poem Rise in soft, hushed tones, causing the audience to move in closer to make sure they didn’t miss a single word of her fine work.

Each of the students were given a prize for their impressive performances. What a way to spend your lunchtime!

Thank you to all the students who performed and to Tia for emceeing.  We should say a special big thank you to Loreto’s Library and Study Centre Department for hosting the event and donating the prizes, copies of Working From Home – an anthology of work from Young Identity members, and last but not least, thanks to Erin for taking the photos.