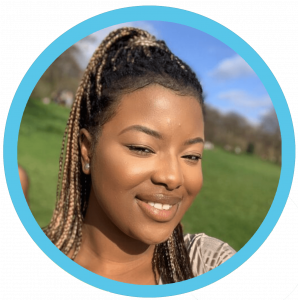 As part of their Black History Month celebrations, the youth ministry website Million Minutes posted an insightful article by Upper Sixth student Destiny Odogiyan (pictured above), giving us a young Catholic’s perspective on the month, faith and race. You can read the article in full below or via Million Minutes.

“My Father’s house has many rooms; if that were not so, would I have told you that I am going there to prepare a room for you?” John 14:2

There seems to be this common misconception at times that Catholicism is a religion for white people in the UK. But this is wrong. Catholicism is a religion for all types of people. Most of the people in the Bible (including Jesus himself) were not white. This is the reason why I titled this blog with John 14:2 because I think it shares the most important message for all Catholics. This message makes clear that God does not discriminate. We are all God’s children, no matter our culture, ethnicity, race, sexuality or background. We are all loved unconditionally by God. Especially as it is Black History Month this October, I want to remind people that Catholicism is universal and includes everybody. It hurts me to see that there are people who believe that Christianity is a religion that hates more than it loves. For some reason people seem to find being Black and Catholic an oxymoron. This is because it sometimes feels that when we look around in society the representation of Catholicism seems to be mostly white people and this is wrong because it goes against a prominent part of Catholicism which is diversity and inclusion. If you go to any Catholic parish, you will find a real diversity of backgrounds in the pews. Catholicism grew at a time of social injustice. Jesus was a social revolutionary: he healed society in many ways. There are many stories in the Bible of God giving the oppressed support to fight for their rights and freedom such as when Moses freed the Israelites. Whenever we are faced with problems and call upon God, we are speaking up and fighting for what we believe in. Prayer is a form of campaign. Dr Martin Luther King Jr was a civil rights activist who also used Christianity as a foundation for his activism. Dr Martin Luther King Jr preached for peace and love whilst fighting for justice. He based his whole movement on peaceful protest, he never used violence as a tactic. In the end he achieved so much with his faith-based ministry and activism. Catholicism is a religion for everybody and anybody who says otherwise is not practicing Catholicism properly. Throughout the Bible the continuous message spread is love, the main thing God wants all Catholics to learn is love because at the end of the day we are all God’s creation no matter our differences and we all have a purpose. This is why we should treat each other with love by treating each other with dignity and respect because that is a basic right. Black History Month reminds us of that right.

Your Hair is Your Crown

Along with writing for Million Minutes and studying for A Levels in Theology, Law and Politics, Destiny also found the time to produce a thought provoking short film for Black History Month.  Your Hair is Your Crown explores the relationship black and brown people have with their hair.  The film was very well received when it was shown to Loreto students and staff. It really is worth a watch.